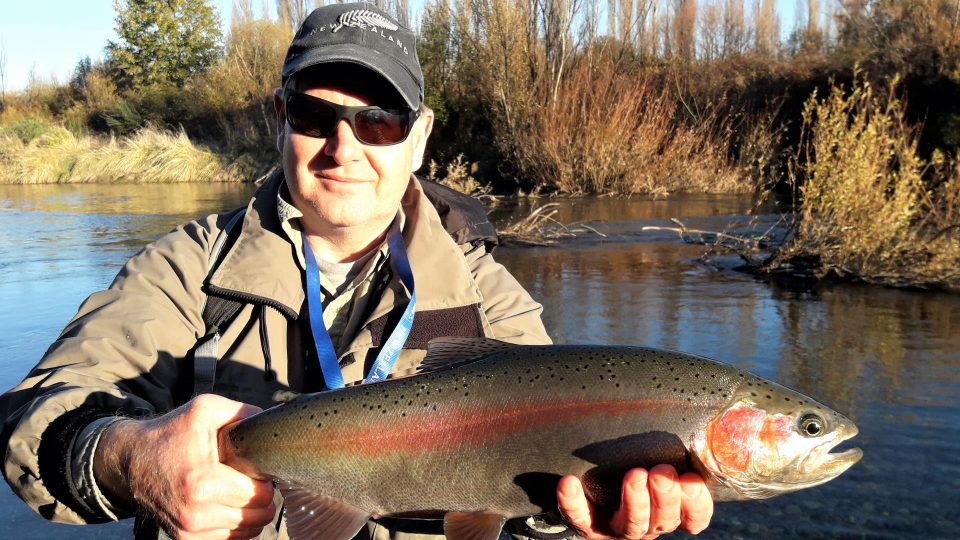 Most of the local Taupo spawning rivers are now reaching peak winter runs of rainbow trout and will start to slow towards October although the Tongariro will still have silvers running right through to the end of November.

Some great fly fishing in New Zealand can be had at this time of year as many local rivers have big numbers of both fresh and recovering trout in them.  It is a popular time to get a Taupo fishing guide as the weather is improving too.  Many of the spent fish are now putting on good condition due to early spring rains making invertebrates readily available in huge numbers because of significantly heavier flows.

Nymph fishing with Caddis and Mayfly imitations can be fast and furious around this time bringing great sport on small streams and the bigger rivers.

October sees the start of the backcountry flyfishing season for most rivers and lakes in NZ.  It can still be quite cold, but the wilderness scenery can be amazing at this time of year with snowcapped mountains and volcanoes surrounding the lakes and rivers that we target at this time.

The stillwater flyfishing is always good at this time of year as you can fish all the shallows that big brown trout usually frequent before the weed beds get too established, it is a great time for a chance to land big rainbow trout or brownies.

Smelting starts when the loopins flower and great sport can be had stalking the edges of Lake Taupo itself along the beaches looking for leaping smelt in and around the bays and river mouths both round Taupo township and over the beautiful Western Bays.

You can liken this experience to Bone Fishing on the flats when it’s on !!

First evening rises start mid November.  Mayfly ,Caddis and Brown Beetle will be on the Dry Fly list and we can usually expect more consistent day time Dry Fly activity towards the end of November.

If it’s classic sighted fishing with big terrestrials that you want then get booked now !!  We can guide you to the hotpsots in the Taupo region and make sure you have the right flies and gear to match the hatch.

The trout are now putting on weight at a furious rate as they gorge on the summers bounties.

Big Cicada patterns in size 6# and 4# will be the order of the day and a big splashy entry will bring trout charging from meters away to gorge on the Steak and Chips of the Kiwi trouts’ annual diet.

And most of all big well conditioned rainbow and brown trout.

All rivers are now open from December and our own favourite little spring creeks are alive with bugs and feeding trout.

The Taupo still waters are now in their prime and can be relied upon for consistent sport throughout the day and evening .

Early morning on a lake edge stalking Big Trophy Browns can be an unforgettable experience for many anglers, some of the trophy brown trout creeks we use will get you so close to the fish you will be casting at trophies just a rod length away !!!

Around NZ the lakes fish start to congregate at the river mouths and a day fly fishing over in the Western Bays of Lake Taupo chasing smelting trout along a white sand beach with your fishing guide can be just stunning.

The evening rise is just at its peak during December and January: long warm evenings with multiple hatches to keep you on your toes for some fast and furious action.  Have a break and a light refreshment then get ready for some of the late evening rise action right into dark, some of these evenings can produce some outstanding huge brown trout that only feed nocturnally.

If time is of the essence and you can’t fit in a day then an evening rise can get you into a lot of fish in a short period and you never quite know when one of those big browns is going to pop his nose out and take a late night Caddis.

AUTUMN: March through May

The trout are in the absolute peak of condition by the time Autumn comes round.  Fish that were 7-8lb at the beginning of summer can be well into double figures at this time of year.  Much of the fishing pressure is off the water now and you can relax knowing you will have plenty of angler-free water to choose from.  The challenge lies in the fact that many of the fish have also become quite educated and can offer the serious fly fisher some fantastic challenges.  The rewards are most definitely there but the game has to be lifted a couple of notches especially from your guide !!!

Once hooked these fish now know exactly where to head and they are now running on high octane fuel !!

The Taupo region stillwaters are also giving up some of the biggest trout of the season, without doubt this is the time of year for a stillwater trophy rainbow or brown trout.  Once again the pressure is off and the lakes are empty but for a few locals who know the score, with the correct approach and location now is the hour on these waters.  We love being able to guide clients here at this time.

The first of the winter spawning runs will start on the northern Taupo rivers during Autumn, they usually coincide with the first serious rains we have.

These first runs are usually the biggest trout of the winter for both Browns and Rainbows.

The weather can very often remain quite mild until late April.

The winter spawning runs are what makes Taupo fishing world famous, people have travelled from all parts of the world ever since the fishery began to sample some of the best winter trout fishing in the Southern Hemisphere.  We can guide you on the popular Tongariro river and also other rivers and streams for spawning trout.

With so many rivers and river mouths to choose from it makes a fabulous uncrowded fishing haven.

All variety of methods are used, at this time of year the priority as with most spawners is to get the flies deep.  Traditional wet line and indicator and egg fishing is most common but new fly fishing methods from Europe and the States such as Cheq Nymphing and Switch rods with Scagit heads and sink tips have made big inroads in NZ on catch rates for many anglers both local and visitors alike.