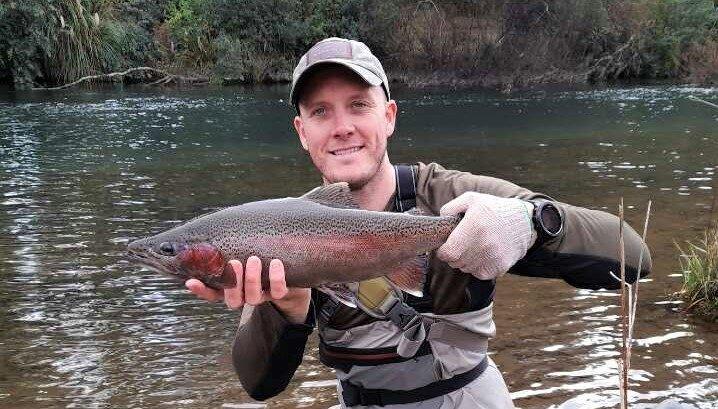 Everyone around Taupo and Turangi is waiting for the fishing to go off but May has been a fairly dry settled month in the Taupo region and the lake is incredibly low. We keep watching for rain but we’ve have no big storm yet to get the rivers up and kick things off. What this does mean is that when we do get a few days of good heavy rain then there should be loads of freshies into the rivers and some of those crazy days were pools and runs keep producing trout after trout after trout. The long range forecast has rain arriving this weekend through next Wednesday so keep your fingers crossed.

The fishing has been similar to the previous month with fresh rainbows coming through in small bursts and brown trout being sighted and hooked in the Waitahanui and Tongariro Rivers. With the low clear conditions it is helpful fishing a longer finer leader, which makes for great sport if you do hook a big strong freshie.

The Hinemaia is getting busier and busier as everyone expects the fish to be up there. It is producing, but not in great numbers, and with such low clear water the fishing is more difficult. If you walk up and are frustrated with the fishing, take the opportunity to scope out new water and check for snags and possible lies, these are easy to see in the current conditions. We were surprised a couple of weeks ago to head to the top pools after a burst of rain and find no colour or extra flow. Anglers we chatted to thought the power company might be holding water in the dam during the rain, so us fishos weren’t getting the benefits of higher coloured flow.

We’ve not been up the TT but will wait for some more rain. The middle and lower pools of the Tongariro River have appeared to be more popular for the wetliners, with lots of anglers willing to trek to the Reid to swing a dark Woolly Bugger or even a smelt streamer. Nymphing the Tongariro with a small Hare and Copper and Caddis patterns has worked well and most of the better trout have been picked out of the faster water at the heads of pools and ripples. Up the top, DOC have cleared some of the big pines on the track round the Sand and Blue pools and these are always worth a look as early spawners tend to hold there.

In past years the fish traps have had some of the larger specimens show up earlier in the season and every year a few big fish are caught in the river mouths like the Waitahanui and Tauranga-Taupo. If you’ve walked up a river or stream and not had a lot of luck then consider trying the Waitahanui rip. Even if you only have a nymphing line you can try a longer leader with a little lead shot and a Woolly Bugger, orange Boobie or red Rabbit on the end, and sometimes trailing a big glo-bug can do the trick. Change of light works well but you must tread carefully round drop-offs.

We’ve had a number of people book recently who have never fly fished and want to go with a guide to learn to fly fish and then continue to practice on their own. None of the Taupo fly fishing guides can 100% guarantee fish, so it is satisfying when someone who has never held a fly rod can actually hook and land a couple of trout by the end of their first day. It’s even cooler when they then buy their own kit and venture out to the Hine or Tongariro to keep practicing. Every new member of the fly fishing fraternity is another person who will go on to care deeply about our pristine lake and rivers, which must be a good thing.

Before we sign-off, don’t forget the southern lakes are closed or closing – Otamangakau now closed and Rotoaira and Kuratau closing end of June.

Be safe, get out there and have fun, and good luck!