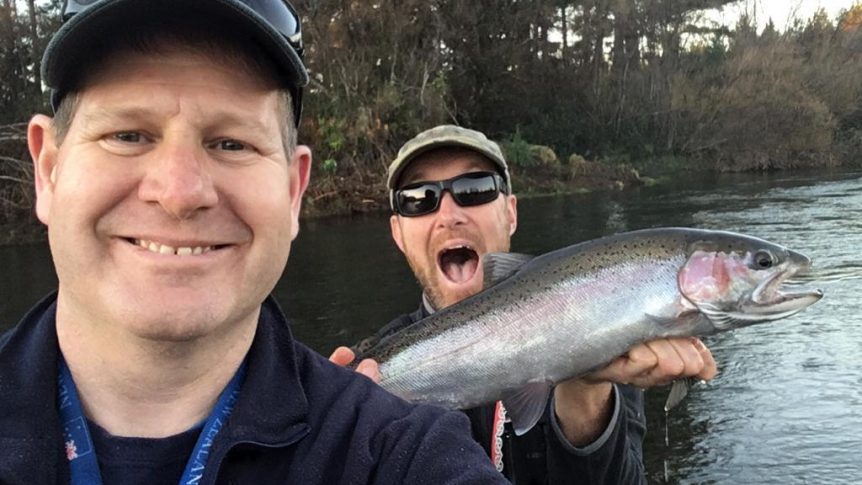 The Taupo winter fly fishing season has started with a hiss and a roar and with many locals saying the fresh run trout are in the best condition they’ve seen in a few years.

We had some beautifully conditioned brownies coming into many of the Lake Taupo rivers earlier in the year, and now most of the rainbows we are seeing are big and healthy and chunky.

Rainfall has been a bit erratic with extended dry periods where fishing conditions are low and clear, followed by downpours that flood local rivers for a day or two.

This morning the Hinemaia was still too flooded to fish, whereas the Tongariro River had lowered and was perfect. As a result everyone converged there with 18 cars in the Bain carpark and lots of anglers right up to the Sand pool battling the wind but enjoying the fishing.

The Tongariro River has been fishing well both for nymphers and wetliners, and each year we see more spey rods out covering more water. There are also more anglers out with a couple of rods kitted up so they can fish more of the pools and runs on the river.

Today on the river there were a number of people wetlining the tails of pools as the water was still a little high and green but not brown. Big green and brown woolly buggers will work well, alongside red rabbit flies.

Remember at the end of your swing to let your flies sit for a moment and then bring them up slowly as in higher flows trout will often lie close to the bank in slower water (if no-one has waded through them).

Nymphing the Tongariro and other local rivers in high flow requires heavy bombs which can be hard to cast and require you to adjust your timing.

Where possible you can lay your back cast into the downstream water to straighten quickly before launching out into the flow ahead. It pays to remember with more flow the trout may be closer so you don’t need to cast as far anyway.

Many locals follow the rule of globugs in the morning then a shift to naturals around 10-11am, but we’ve been having success on small Cadillac pheasant tails and olive caddis flashbacks.

For some reason its seems this year the globugs have been picking up more hens while naturals have snagged more jacks. If anyone has a theory on this let us know as later in the season its usually the other way with jacks hanging round eating more eggs.

The Bridge pool downwards seem very popular at the moment, yet there are fish throughout the river. If you get to a carpark and its chocka then give the town pools a go.

Around the Judges, Major Jones and Hydro offer a lot of good water with easy walking. Anglers often wrongfully expect them to be busy, when most people decide they’d rather drive up or down the river than fish in the middle pools.

The Tauranga-Taupo had a great run in May with some good runs coming through and the lower pools on a couple of days giving up lots of fresh rainbows. The river is brown today but after the rain we’ve had the upcoming week should be really productive.

The Hinemaia likewise should be fishing well from Tuesday on, but with the school holidays started it will be full of families and people holidaying in Taupo.

The Waitahanui River being spring-fed is fishable when others aren’t. Today there were a number of anglers in the lower pools yet few cars in the lakefront carpark.

It’s worth taking the time to learn this river as it has so much to offer in the way of rainbows and browns, with a lot of big fish up and down its banks.