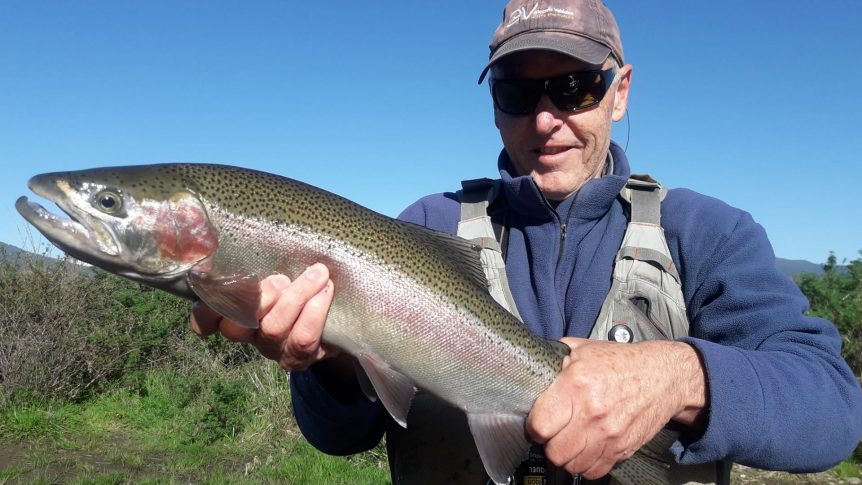 Whilst we have had some long patches with no rain, the winter fly fishing round Taupo rivers has still offered some great sport with quality fish being landed.

As with the last five years or more, it seems a lot of trout are spawning in September and later instead of the June-July period they used to.

The Tongariro and Hinemaia Rivers have had huge pressure from anglers over the last month, with the Himemaia getting hammered by Czech nymphers getting flies into the more inaccessible places that traditional nymphing doesn’t.

Some locals think this has harmed the fishery, but overall fishing on the Hine might simply be a bit tougher because so many people are fishing it and the trout are getting wiser to all the glo-bugs floating past. We know anglers who have tried Czech nymphing, caught heaps, then got a bit bored and returned to the enjoyment of traditional Kiwi nymphing.

At the end of the day, if we get more kids and others interested in fly fishing by trying the arguably easier technique of Czech nymphing, then hopefully they’ll go on to fly fish more, and contribute to our community of people who love fishing and love our lakes and waterways.

Fly fishing the Tongariro River has delivered some beautiful trout over the last couple of weeks. The flow has stayed low and we’ve not had a lot of rain, yet fresh fish are still coming into the river. The other morning we had low and clear conditions yet hooked into 15 fish in a morning, of which 10 were shiny fat silver bullets. A couple fought so hard we thought they were foul-hooked.

Local advice is to start nymphing with glo-bugs and change to small naturals mid-morning, but this time of year you’ll do just as well with naturals all day. Move through the pools and with luck you’ll finding holding patterns such as in the tail or head of pools or down the slower riffles of long runs.

If you’ve been casting a while into a fishy spot with no luck, change your flies, and again and again. The trout get a lot thrown at them and sometimes a different colour or shape or size can elicit a strike. We’ve been hooking freshies on crazy-legs bombs and any nymphs with green in them.

The wetliners have been active in the lower pools such as the Reid and Bridge pools. Again this time of year try something a little different, such as a bead head on your woolly bugger, or even a smelt fly in the lower pools to entice trout that have just come up from the Delta.