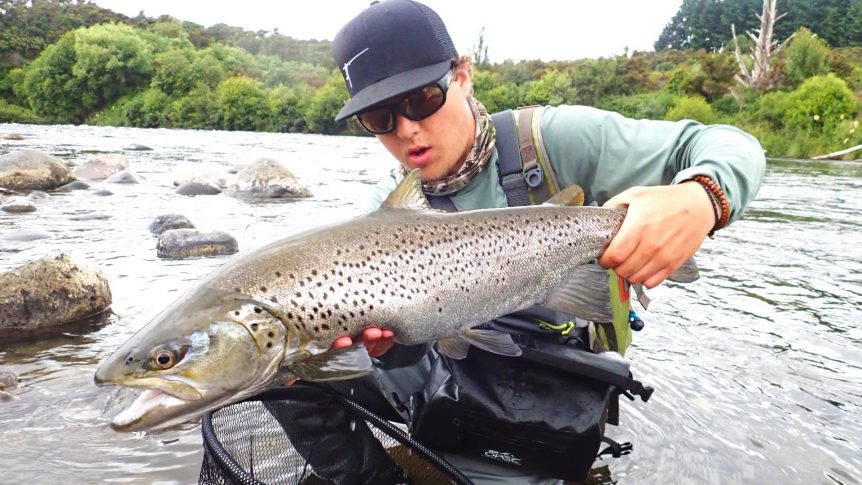 It’s coming up to mid-September and we are still due for some major runs of trout in the Tongariro and other local rivers. Heavy rain in the last fortnight did not bring the expected large numbers of Rainbows up, but also did not bring flood damage to existing redds.

Over the last seven years, DOC fish trap counts have shown over 60% of trout spawn from September onwards, and anglers fishing the river-mouths are seeing lots of fish on sounders and on the fly – so we are in for a great few months as the weather warms and the days get longer.

The Tauranga Taupo and Waitahanui have been the pick of local rivers when there has been overnight rain. The TT had some great mornings with angers lined up below the bridge nymphing with egg patterns and hare and copper bombs. Likewise the Waitahanui had pulses of fish coming through quite quickly, some short and very fat.

The Hinemaia seems to have a lot darker fish at the moment, particularly jacks who just want to hang around and harass the fresh hens as they come up.

The Tongariro River is fly fishing well for both the nymphers and wetliners, with lots of double-handers about in the lower and town pools. The other morning in light rain there would have been eight or more fly fishing the Bridge Pool and you could see multiple hook-ups as the fish came through.

This week has had freezing starts then hot sunny days. In these conditions many local anglers start nymphing with egg patterns then shift to small naturals as the sun rises. Mayfly and caddis imitations are worth trying, particularly around the midday- early afternoon time when there can be a burst of insect activity.

We’ve been finding fresher fish in the heads of pools and darker spent fish more in the slower water, which makes sense when you think about what they are doing. In the bright sun remember to employ summer stealth-mode with longer traces as well. Spending 10 minutes to adjust your kit can make all the difference and is worth the effort.

Lake Rotoaira is open now but remember you need your Taupo Licence as well as a permit from the Lake Rotoaira Trust which you can get from the Turangi i-Site. This lake has some incredibly strong fish that will smoke off on your line, so if you have a few days in Turangi and have a warm windless day then it could be worth the trip.