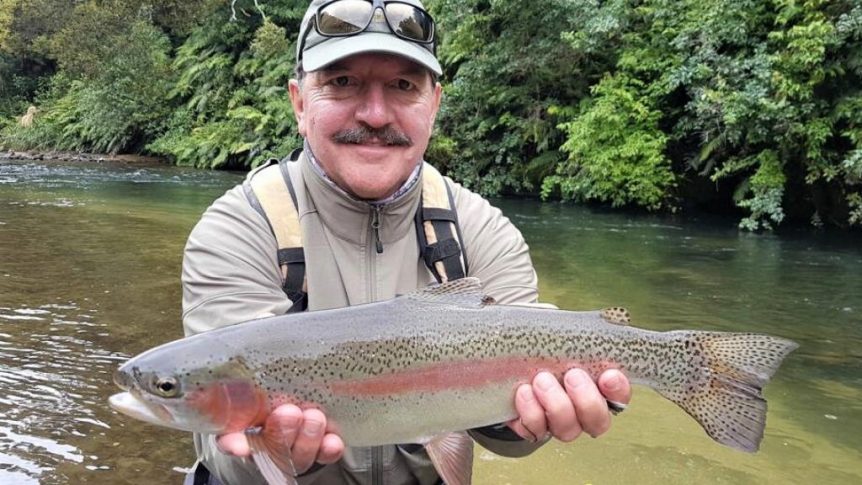 Around Taupo and Turangi all the anglers are waiting for rain, with reports of trout stacked at the river-mouths waiting to run. Most people agree it’s a late season, yet there are still plenty of fish up our local rivers and great sport to be had.

This six and a half pounder was caught on a 4/5 weight rod and put up a huge fight. It would have been a stunner when it first arrived in the river, and while you may land some coloured fish at the moment, there are still freshies in amongst them.

The Tauranga-Taupo is possibly the pick of local rivers with reports of good sport further up for those prepared to walk. Without consistent rainfall it appears smaller pods of trout are running and then holding higher up.

The Tongariro River likewise has numbers of fish in the upper pools, with rafting guides seeing a lot of trout holding above the winter limit. It seems like the fish aren’t staying as long in the lower and town pools, so if you stay in one place you may get action for half an hour or so and then a lull.

The area between the Bain and Reid pools has produced good catches on the wetline to green Woolly Buggers and red Rabbits, while higher up small egg imitations are working well. The warmer weather over the last few days will mean natural nymph patterns are worth a shot, particularly around midday.

The Hinemaia has had a lot of fly fishing pressure and most of the fish coming out are quite dark, whilst the Waitahanui still has big Brownies being sighted as they move up the lower reaches to hold further up. The upper pools are the best bet until further rains come.

With fish holding in the lake, it pays to consider fishing the river-mouths from the shore or a boat or kayak. Large lime and orange Boobies can work well, and can large night flies stripped up the drop-off.

If you are an out-of-towner, keep watching the long-range forecast as to when the next rains come there should be some great fly fishing to be had by all across the Taupo region.